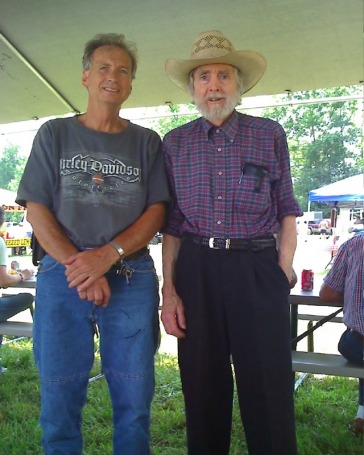 It was a blessed day at the annual Woolwine Covered Bridge Festival. I arrived late and missed the opening ceremony, as I had taken the long way around through Claudville, Ararat, and Meadows of Dan to view the scenery.

One of my many stops on the way, I met and talked with fellow Motorcyclist from three States, impressed with our mountain views and roads.

A couple was on their way to transverse the Blue Ridge Parkway and had accomplished the Shenandoah Valley to Meadows of Dan leg. They helped me tighten up a mirror on my Motorcycle that had worked loose and again they were on the Parkway bound for Tennessee. Oh, how I wanted to join up for that trip!

Oh well, off to Woolwine, except I could not pass Lovers Leap without stopping and viewing Woolwine from a different perspective. There I met a gentleman from Ohio. We admired the view and compared the area he lives in Ohio with the Beauty of Patrick County.  Of course we won!

Again on to Woolwine, by now about two hours late; Crystal Harris and the folks in Woolwine hosted a great festival, good food, music and of course the two Covered Bridges. I just had to ride my Motorcycle across one of the Bridges.

Highlight of my day was meeting and talking with Buddy Pendleton, an icon of Bluegrass music and one of the greatest fiddler players around. Buddy worked for the US Postal Service and delivered the mail in Patrick County.

However, his most important achievement was, playing the fiddle. He played with such bands as Bill Monroe’s Bluegrass Boys, Greenbriar Boys and recorded and performed with Joan Baez. Buddy also holds the title of World Champion Fiddler at Union Grove for five consecutive years.

We talked for quite a while and shared stories. I was Blessed and fortunate to have met Mr. Pendleton and have my photo taken with him.